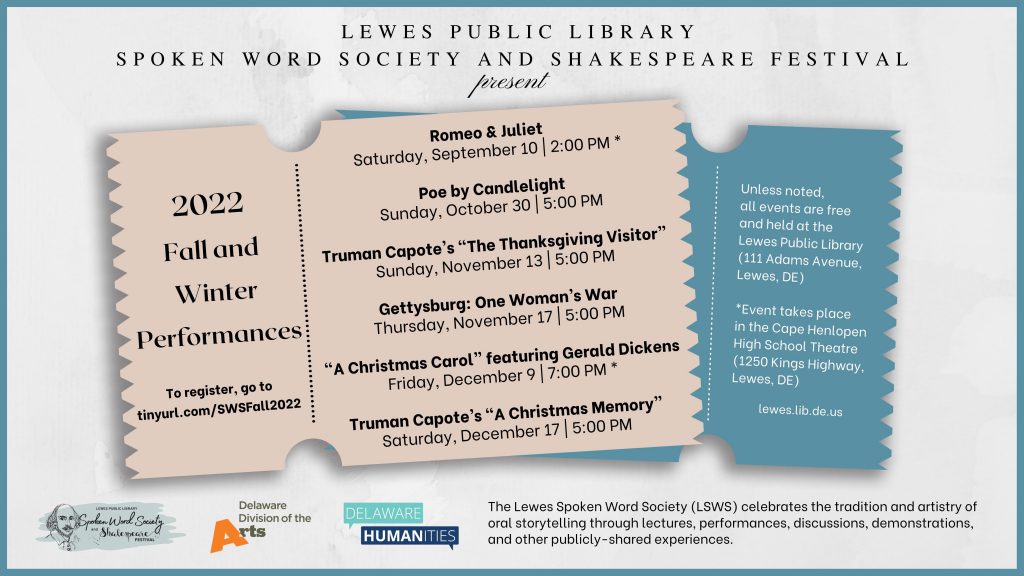 Classic Theatre of Maryland (CTM) presents Shakespeare’s Romeo and Juliet in a fresh and exciting way. Professional actors Joshua Olumide and Kira Janine Bennett perform live in the title roles while interacting with actors and scenery filmed in CTM’s studios. Using state-of-the-art technology and a high degree of creativity, CTM’s founder and producing Artistic Director Sally Boyett  creates a seamless multimedia experience that is entirely true to the Elizabethan text while adapting 21st century ideas of staging and performance. There will be a Q&A session afterwards.

Since 2015, the award-winning Equity professional East Lynne Theater Company (ELTC) has been presenting what has become a yearly ritual for many: “Poe by Candlelight.” Held on only one night annually near Halloween, it involves ELTC actors reading their favorite stories and poems penned by the master of the macabre Edgar Allan Poe. The Lewes Public Library Spoken Word Society now brings this remarkable piece to our community. Stories this year under consideration are

The reading will feature Gayle Stahlhuth, Artistic Director of ELTC since 1999, along with another member of the professional company yet to be named. Gayle has performed in off-Broadway productions, national tours, regional theater, and in television and radio. A member of AEA, SAG-AFTRA, and the Dramatists Guild, Gayle was honored by the National ssociation of Professional Women for her work in theater.

Suzanne Savoy and Jack Herholdt return to the library for a live reading of “The Thanksgiving Visitor” by Truman Capote. Savoy and Herboldt first performed this piece online at the library in 2020 and are here again to share their remarkable gifts of story-telling to kick off the holiday season.

Nine-year-old Buddy has a problem. Every day, he gets stopped on the way to school by Odd Henderson, who calls Buddy a sissy, pins him to the ground and rubs burrs into his head. Miss Sook, Buddy’s older cousin and best friend, invites Odd to her big Thanksgiving dinner, where important lessons await both Odd and Buddy.

“The Thanksgiving Visitor” was first published in McCall’s Magazine in 1967, and is a companion piece to “A Christmas Memory,” which will Savoy and Herboldt will perform at the Library on Saturday, December 17, 2022.

Acclaimed professional actress Michèle LaRue will give a dramatic reading adaptation of Elsie Singmaster’s powerful 1913 collection Gettysburg; Stories of the Red Harvest and the Aftermath. Published on the semicentennial of our War Between the States, this moving volume revived fading memories of that brutal conflict and foreshadowed the greater carnage of the World War soon to come . . . the War to end all Wars.

In Gettysburg: One Woman’s War, Michèle embodies seven characters—most prominently Singmaster’s fictional wife and mother, Mary Bowman. With her we travel the emotional and physical terrain of 50 years: from the cannons’ first roar to the grief and devastation that follow; from the promise of Lincoln’s visit and commemoration, to the healing only time can bring.

Back by popular demand! Gerald Dickens’ performance of A Christmas Carol has received standing ovations all over the world. Using his own adaptation of Charles Dickens’ classic Christmas tale, Gerald Dickens plays over 30 characters using vocal and physical talents to bring each scene vividly to life.

Gerald Dickens is an actor, director, and producer, and the great-great-grandson of the author Charles Dickens. In 1993 he created his first one-man show, a theatrical performance of A Christmas Carol inspired by Charles Dickens’ own energetic readings of the 1860s. A fascination with the life and works of Charles led him to write and direct further one-man shows including Mr. Dickens is Coming!, Nicholas Nickleby and Sketches by Boz.Dickens regularly performs in major theatres and arts centres, arts and literary festivals in the UK, as well as at hotels, stately homes, and on cruise ships.

This event is supported in part by a grant from M&T Bank and Sussex County Council.

Suzanne Savoy and Jack Herholdt give a live reading of “A Christmas Memory” by Truman Capote. Savoy and Herboldt first performed this piece in-person at the library in 2019. They return this year to share their remarkable gifts of story-telling just in time for the holiday season.

Capote’s mostly autobiographical short story first published in 1965. It takes place in the 1930s and follows the period in the lives of the seven-year-old narrator, Buddy, and an elderly woman, Miss Sook, who is his distant cousin and best friend. The evocative narrative focuses on country life, friendship, and the joy of giving during the Christmas season, and also gently yet poignantly touches on loneliness and loss. It is a companion piece to “The Thanksgiving Visitor”, which will Savoy and Herboldt will perform at the Library on Sunday, November 13, 2022.

The Lewes Spoken Word Society (LSWS) celebrates the tradition and artistry of oral storytelling through lectures, performances, discussions, demonstrations, and other publicly-shared experiences. The LSWS is partially funded by a grant from the Delaware Humanities, a state program of the National Endowment for the Humanities, and by a grant from the Delaware Division of the Arts, a state agency, in partnership with the National Endowment for the Arts. The Division promotes Delaware arts events on DelawareScene.com.

Thank you to Byers’ Choice Ltd. for bringing Gerald Dickens to the United States.